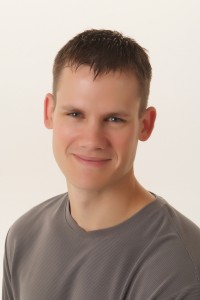 Kevin S. Foster (b. 1975) did not begin his formal training in music until the age of 13, when he took up piano lessons. His talent was readily apparent and his skills developed rapidly, allowing him to attend Ohio Wesleyan University on scholarship in piano performance.  In his time there he studied voice with Robert Nims, performed lead roles in operettas, and began writing music.

In 1997, Kevin relocated to the Kansas City area, where the desire to share his passion for music led to collaborative work as a vocal coach and musical director.  As a performer, he has held leading roles in The Secret Garden, The Gondoliers, Orpheus in the Underworld, The Yeoman of the Guard, Wise Women, and Children of Eden. Kevin’s credits as musical director include Camelot, Trouble in Tahiti, A Hand of Bridge, and A Little Night Music. Kevin continued to write music, primarily for the choirs he  was working with at the time.  It was while accompanying at North Kansas City High School that he wrote A Sonnet, a lighthearted and clever setting of Shakespeare popular for use at contest and concerts.  Ave Dulcissima Maria (published by Shawnee Press), a double choir piece weaving both Latin and English texts, was also written during that time.

In 2002, Kevin returned to Ohio to study for one year under William Skoog and Mark Munson on a graduate assistantship in the choral conducting program at Bowling Green State University,  but ultimately chose to apply his musical gifts outside the world of academia. Kevin’s time is presently divided between his role as a stay-at-home dad and his musical endeavors as a composer, vocal coach, and occasional voiceover work. Kevin remains in high demand as an accompanist and as a tenor soloist. Past performances include Bach’s Magnificat, Handel’s Messiah, Haydn’s Creation and several Bach cantatas. His gift for connecting with people of all ages has earned him respect as a conductor and clinician as well.  Composer of nearly 30 songs (many published through Santa Barbara Music), including several commissioned pieces, his music continually receives accolades from performers and audiences alike for their expressive, sensitive text settings.